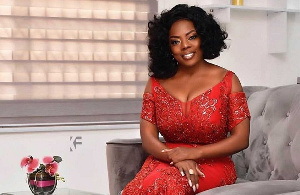 The ‘grammar queen’, made this known on twitter when a curious fan wanted to know what really occupies the newscaster’s mind at night.

Florence Obinim replies Kennedy Agyapong: I’ll not leave my husband because of you

The reply the fan got was highly not expected but Nana Aba, spit it out so raw that fans and followers were just amazed.

According to Nana Aba Anamoah, what really keeps her mind occupied in the night is s3x, as to whether the screen goddess was being real or throwing a jab, only her and her God knows.