A former UN adviser on governance Prof. Agyemang Duah has waded into the partisan exchanges among key politicians in the fight against COVID-19 in Ghana saying it is the responsibility of the President to keep the nation focused. 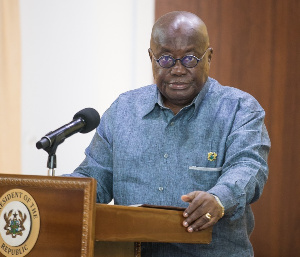 According to him, the government should be cautious reacting to political comments in the wake of the pandemic since its primary job is to ensure that Ghanaians are protected.

“The President has to play the bigger person in these politics because he is the official leader of the country. The government has a primary role to play in building consensus. I wish the vice president had not replied the way he did. The onus of bringing people together lies on the President,” he told Francis Abban on the Morning Starr.
READ ALSO: Nation wreckers – Ursula Owusu-Ekuful reacts to Chemu Bridge ‘sabotage
However, noted it will be difficult for politicians to stop politicking as elections get closer.

“At the moment it’s is important that the nation focuses on defeating COVID-19 which is destroying the world. So far as the elections are approaching in Dec it is going to be difficult for politicians to stay put”.

Meanwhile, former deputy Finance Minister Cassiel Ato Forson has admonished Vice President Mahamudu Bawumia not to compare the current COVID-19 pandemic to the electricity crisis saying it is inhumane to do that.

In a Facebook post, Mr Ato Forson stated that “comparing a pandemic to an energy situation that occurred because the NPP Government failed to invest in power generation over an 8year period only reflects the confusion that has characterized your recent pronouncements.
READ ALSO: Rise up against Akufo-Addo’s dictatorial closure of radio stations, abuse of journalists – Mahama to Ghanaians
“In any case, it is inhumane to compare a pandemic killing human beings to an electricity generation problem that was resolved by the same government. It is time to caution Dr. Bawumia not to be proud of cosmetic macro-economic data that fails to translate into economic well-being. Today, Ghana’s public debt has increased from GHS 120.3 billion as at 31st December 2016 to GHS 235 Billion as of 31st March 2020.

“Your government is struggling to service interest on public debt; as a result, lenders have started charging penalties on delayed interest payments. Sadly, our debt levels are so high that we risk becoming a high debt distress country yet you have failed to show humility and competence in fixing your mess.”

His comments come after the Vice President in a jab encouraged former President John Mahama to compare data before speaking.

According to Dr Bawumia, the NPP has handled the COVID-19 pandemic better than the NDC would have handled it.

“This time in the lives of our country is really not a time for politics, we are facing a global pandemic and the focus of the President is leading to make sure the right things are done to protect the lives of Ghanaians. that notwithstanding, we have seen that the former President John Mahama has been making some statements and it has been proven that many of those statements are untruths.

He added “I can say without any fear of contradiction, the data shows that in the history of the Fourth Republic, there is no government that has provided as much infrastructure across all sectors in its first term than the first term the government of Nana Addo Dankwa Akufo-Addo. If you want to challenge that please bring your data.”