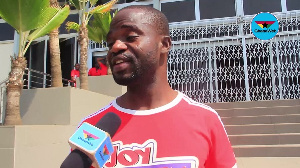 Freelance investigative journalist Manasseh Azure Awuni has stated that even if he is given free water for the next four years, his vote will not be influenced by it, insisting that free water is not part of the priority areas that influence his vote.

“My water bill is a fraction of what I spend on data every month. So if you provide free water for me for the four years, it will not influence my vote. I have my priority areas when it comes to good governance and what will inform my voting decision,” he maintained on social media.

READ ALSO: Deputy Minister designate: Okoe Boye now Health.
Manasseh, however, conceded that Ghanaians whose vote will be influenced by the President’s announcement that they will enjoy free water for the next three months (April May and June) are justified given that each individual has what can influence their vote, insisting that persons not impressed by the President’s gesture in the midst of the coronavirus pandemic must be allowed to hold their divergent opinion.

“But it will be wrong on my part to assume that everyone is like me. So let’s allow those who will be swayed by the three-month free water to express their joy and their political loyalty. In the same way, let’s allow those who think this cannot undo whatever bad governance (real or perceived) that they have been subjected to under this government to express themselves.

To try to shut others up because they are not on the bandwagon of praise singing is wrong. It’s undemocratic. And it infringes on their right to free speech and free expression,” he explained.

Following the President’s announcement of free water for the next three months, many concluded that it was a masterstroke for winning the next Presidential election with some trolling John Mahama for having no chance at all given the development.

Bernard Mornah Fires: My comment to EC was not a threat.

Angel Obinim to send mobile money to all church members