Highly placed sources within the Ghana National Ambulance Service have denied claims by musician, Bice Osei Kuffour, popularly known as Obour, that the status of his father’s possible 2019 Novel Coronavirus infection was disclosed to the ambulance service team that took him to the hospital.

Obour’s father died at the Greater Accra Regional (Ridge) Hospital on Friday after he tested positive for Covid-19. The former President of the Musicians Union of Ghana and an NPP parliamentary candidate hopeful said the Covid-19 test results of his father had not come out when his condition worsened. He said he was advised to call the Ambulance Service to take him to the Ridge Hospital when he went to the Legon Hospital to see a doctor about his father’s condition.

Some health workers at the hospital, as reported by Joy FM, said they had not been told about Obour’s father’s full symptoms and his travel history in order to enable them to take full precautions against the dreaded Covid-19.

His father was not taken to the Covid-19 centre at the hospital when he got there on Thursday night until he died later on Friday. The Ridge Hospital is one of two health facilities designated for Covid-19 cases even before Ghana recorded its first case.

The musician has issued a statement denying Joy FM’s report. He said he made the disclosure even to the Ghana National Ambulance Service staff who sent his father to the hospital. 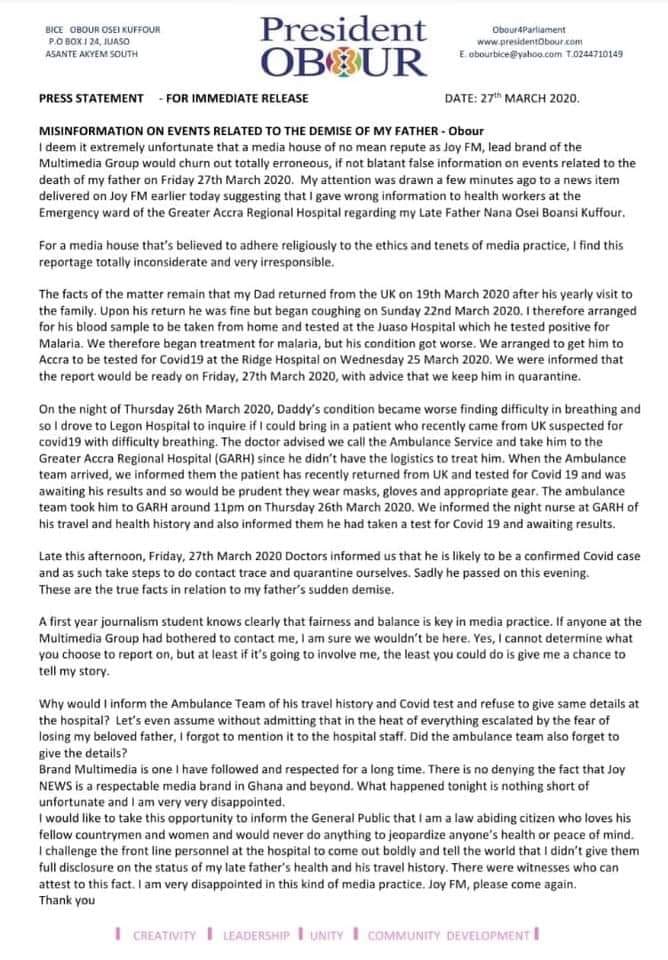 According to a highly placed source within the ambulance service, it was not true that the full symptoms and travel history of Obour’s father were disclosed to the staff who went to pick the patient to the hospital.

The source told Manasseh that the ambulances service had refrained from going public on the matter because the service was adhering to strict professional ethics and did not want to go to the media to divulge all information about the clients they dealt with.

The source, however, said Obour’s information was not true because the ambulance service had instituted strict protocols concerning Covid-19, and every ambulance station was aware of this, They, the source said, would not breach the protocols for their own safety.

According to the source, it was the ambulance service station at Atomic which picked Obuor’s father to the hospital.

It said if there had been any disclosure that linked the Obour’s father to a suspected Covid-19 case, the Atomic ambulance station would not have handled the case in the first place.

“The information given to the ambulances team was that the man was diabetic and had difficulty in breathing. This is a common symptom and there was no reason to suspect that the case was related to Covid-19,” the source told Manasseh.

“Once a team has any reason to suspect that a case is possibly linked to Covid-19, that team withdraws and calls the Covid-19 team to deal with it,” the source said.

Obour said the Ambulance Service officials told him that per their records, what they heard when he (Obour) called before dispatching the Atomic Ambulance Station team was that his father “was diabetic and had difficulty breathing.”

The Cried of National House of Chiefs: EC has refused to honour our invitation on new register dialogue

He said he personally called the Ambulance Service and when the team came to the house to pick his father, he was present with them. He said he asked them why they hadn’t come in their full Covid-19 apparel, and they said they would see the patient first.

He said when when they got into the house and saw his father and he told them that his father had been tested for Covid-19 and the result was not yet out, they got back to the ambulance to wear gloves and nose masks before attending to his father. They disinfected afterwards, he said.

At the hospital, before the ambulance staff left, Obour said one of them came to give him (Obour) his (the Ambulance Service staff’s) number.

“The ambulance guys told me I should call them when the results came and was positive so that they should quarantine. The one who gave me his number is called Isaac and I saved it as Isaac Ambulance Kwabenya” Obour said.

“He too is saying the same thing his boss told me so my question is, if he didn’t know about the travel history and Covid-19 test, why did he say I should call him when the test was out?” Obour said.

He revealed that he and his brother had tested together with their father because they had been close to him and their results proved negative, while their father was positive.

He maintained he had told the triage nurse at the Ridge Hospital the full details of his father’s medical history, including the fact that he had returned from the United Kingdom not long ago shortly before the mandatory quarantine.

He said some people at the Ambulance Service and the Ridge Hospital had been negligent in the line of duty and wanted to cover up and put the blame on him.

NPP Primaries: Forget them! Obour is ripe for MP role