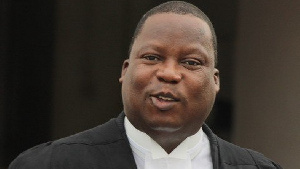 Lawyer Philip Addison has been disqualified from contesting the Akuapem North seat on the ticket of the ruling New Patriotic Party (NPP).

Addison, who rose to fame during the 2012 election petition hearing at the Supreme Court, was hoping to unseat incumbent and deputy Minister for Information Nana Ama Dokua Asiamah Adjei.

Addison, who lost the Korle Klottey seat in the Greater Accra region during the 2016 elections, was disqualified from contesting the Akuapem North seat because he “hasn’t nurtured the party at the constituency”.

One other parliamentary hopeful William Agyei Twumasi, who is the Bursar of Presbyterian College of Education, Akropong was also disqualified for allegedly using the party’s logo fraudulently for his own health insurance other than the national health insurance.

Also, during vetting it was discovered that both of them had started campaigning openly before nominations were opened, which flouted the rules of engagement hence the need to disqualify them.

Timesghana.com also understands that it was clear at the vetting that the two disqualified candidates had little knowledge about the constituency they are vying for. It came out that they didn’t even know the number of polling stations in the constituency as well as the electoral areas.

As it stands, timesghana.com gathers that Nana Ama Dokua will go unopposed if the two do not appeal the decision of the vetting committee.

The ruling party will be electing a presidential candidate on April 25, 2020.

Parliamentary candidates will also be elected the same day.

Already, the party is vetting potential parliamentary candidates across the country as part of the election process.