Former President John Dramani Mahama has charged Ghanaians to oppose what he describes as the dictatorial governance style adopted by his successor in dealing with issues related to the press. 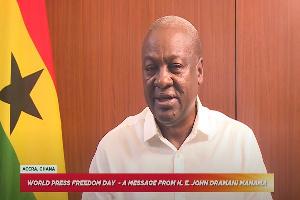 He claims President Nana Addo Dankwa Akufo-Addo’s decision to close down some renowned radio station across the country was a typical example of an attempt to gag journalists from executing their roles in society.

According to him, the Akufo-Addo-led administration has also failed to fully address issues related to the abuse and harassment of some journalists in the country. Notably, the harassment of Edward Adeti, Manasseh Azure and the brutal murder of Ahmed Suale.”

In an official address to the nation on the event of World Press Freedom Day, the former president said, “…Let us rise up and speak against the dictatorial withdrawal of radio frequencies and closure of radio stations by the government of Nana Akufo-Addo. Let us remind and demand of government to stop paying lip service to the Right to Information Act. Let’s encourage, cherish and always expand frontiers of the freedom of the press in this digital world…” he said.

In an attempt to estimate the level of press freedom journalist enjoyed during his tenure to what exists in the current administration, Former President, John Dramani Mahama said Ghana performed considerably better on the press freedom index in during his time as president.
READ ALSO: Nation wreckers – Ursula Owusu-Ekuful reacts to Chemu Bridge ‘sabotage
“According to Reporters Without Borders, during my tenure as president of Ghana, we became the country with the highest level of press freedom in Africa, at the time we were ranked number one out of 54 countries in Africa we were also placed 23rd on the global ranking… we have unfortunately lost this priceless status that made all of us very proud. This should worry us…,” he said.

Two radio stations, Radio Gold and Radio XYZ which were purported to be affiliated to the opposition National Democratic Congress were shut down in May 2019, on grounds of illegal operations.

The National Communications Authority at the time said the radio stations had been “operating without valid authorisations as determined by the 2017 FM Broadcasting Audit are being shut down with immediate effect as an enforcement action in view of the decision of the Electronic Communications Tribunal.”

This brought several political bunters in the media but not much has been heard of about the radio stations thereafter.

Four things we learned on Newsfile: ‘Time to bring in soldiers to check road...