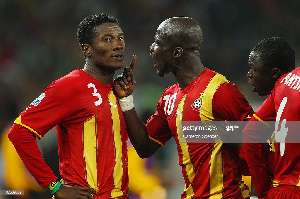 Ghana’s goalkeeper during the 2010 World Cup, Richard Kingston has open the lid on the Black Stars’ quarter-final tie against Uruguay, in which Asamoah Gyan missed a last-minute penalty to deny Ghana a chance of playing in the semi-finals.

Ghana’s dream of taking Africa to the FIFA World Cup semifinals for the first time couldn’t materialized following their penalty shootouts elimination after striker Asamoah Gyan had missed a last-minute penalty for the Black Stars after Suarez handled a goal-bound header from Adiyiah.

However, it was rumored after the match that Captain Stephen Appiah wanted to take the last-minute penalty but Gyan refused to hand over the ball to him as he wanted the glory for himself.

10 years after the World Cup in South Africa, goalkeeper Richard Kingston in an interview with Kumasi based Fox FM said there was no iota of truth in the rumours surrounding the penalty.

“Stephen Appiah never wanted to take the penalty against Uruguay in 2010 World Cup” Asamoah Gyan was our first penalty taker. When there is a penalty everyone knew Gyan will take it.”

He even revealed that it was Stephen Appiah who picked the ball and handed it over to Gyan when the penalty was awarded.

“So, against Uruguay when the penalty was awarded Stephen Appiah took the ball immediately to hand it over to Gyan”

“Sometimes, I hear people say Appiah wanted to take it but Gyan stopped him. That was never true. Gyan was always going to have it,” He told Fox FM in an interview.

Yacouba: Immediate-past Porcupine Warrior to soldier on with Medeama

Angel Obinim to send mobile money to all church members