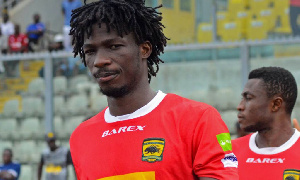 Yacouba having arrived in Kumasi as a free agent from Stade Malien de Bamako, the pacy outside forward showed his exploits in friendlies prior to his debut league game.

These heightened fans’ anxiety since recurrent injuries to Saddick Adams, an injury to Abass Mohammed and Mohammed Yakubu’s dip in form had left the Porcupines bereft of a goal threat.

Current Executive Chairman of the club, Prof. Dr. Kyei’s reign was already in shatters as then club topscorer, Dauda Mohammed had joined Anderlecht in Belgium.

The club quickly moved in for the services of Yakubu Mohammed who only flattered to deceive.

His dip in form coincided with the sack of coach Lugarasic and the latter appointment of Steve Polack.
Read Also: Caf Confederation Cup (2014) defeat worst moment of my career – Chibsah
Polack revived the club’s hope with a quick switch for former Ghanaian youth player, Saddick Adams.

Adams who had previously played for Atletico Madrid B adapted to his new role and managed to get 10 goals in 13 appearances for the Reds including a hat-trick against bitterest rivals, Accra Hearts of Oak in the 2017 MTN FA Cup final.

A missed penalty in the first leg of their CAF Confederations Cup qualifier and an injury in Brazaville against CARA was the beginning of the end for the club’s reported highest earner.

Saddick further suffered concussion when Kotoko took on Hearts of Oak in the 2nd leg of the ‘[email protected]’ Cup.His inability to finish the game left fans with polarized views of his potentials. The striker took a long lay off with the club appointing a new coach to lead the Reds into the new season (2018).

New Coach, Paa Kwesi Fabin took to the media to express his joy at the potential of having him partner new recruit Fred Boateng who had managed 3 goals in his first 4 league games.

With his paperwork sealed, the attacker who had played with an eye for goals in the friendlies debuted on matchday 10 against Hearts of Oak.

He was lively playing off the shoulders of Frederick Boateng.Kotoko lost but he got his goal in the next fixture away to Karela United which ended in defeat too.

Boateng, Adams and Yacouba all started this game. With the transfer window opened, the Coach requested for seven players to be laid off. Saddick was part of the list having played just one league game the whole season.

His absence meant Yacouba was to be the main character in attack.Yacouba who was more accustomed to the wings in his previous clubs in Burkina Faso and Mali took up the new challenge and some adventure it was.

Three goals in 3 games and a penalty won against Liberty Professionals made him a household name. Five assists in 5 starts in the club’s continental quest in 2018 voiced his endeavour.

5 goals in 4 friendlies playing behind Boateng or Owusu Obed climaxed his showmanship during the Anas expose enforced break.

Blessed with excellent movement off the ball and the ability to skip past markers, the attacker is enjoying an unheralded success as a ‘False 9’.

Just like Arsene Wenger did in 2009 with Robin Van Persie as a ‘False 9’, Kotoko’s Akonnor, now Black Stars manager found a gem in the former Etoile Filante wideman.

Similarly to Van Persie whose presence accommodated Bendtner or Eduardo in a two top attack, Yacouba flourished with Safiu Abdul Fatawu with the later netting 2 and assisting 1 in the Confederations Cup.

For C. K. Akonnor’s side that liked to pass from the back, his ball playing abilities suited perfectly.His runs behind defenders had seen him miss clear cut chances but the same attribute saw him win 2 penalties for the side in the CAF Confederations Cup campaign in 2018.

His ability to drop deep saw Fatawu make runs with Gyamfi and Baako also thriving on that.

His link up play formed this strike team.

As a deep-lying striker: Yacouba has exhibited the dribbling ability to take advantage of space between the lines, good short passing to link up with the midfield and the vision to play through teammates making runs from deep to goal with him taking the centre backs away.
Read Also: Asante Kotoko Accra Rep Edmund Ackah resigns
Once he finds the touch to send those sitters and curlers into the net, he will be the perfect ‘False 9’.

Until then, his dead ball speciality, his ability to start Kotoko’s defending from the front amongst others was enjoyable.

That campaign projected Yacouba’s qualities to the entire continent with clubs such as ZESCO United and Orlando Pirates fronting the chase for the Burkinabe import.

Asante Kotoko will rebuff their requests for their prized asset demanding for more cash.

This someway-somehow affected his turn out for the Porcupine Warriors with Abdul Fatawu Safui stealing the limelight from.

He will stay in his native Burkina Faso for over a week with reports suggesting he was under the weather whiles others saw traits of a contract rebel.

He eventually touched down but did not renew his contract with Asante Kotoko despite several negotiations.

It will lead to Chief Executive Officer, George Amoako publicly claiming the club does not need him.

Another continental quest began following the club’s success in the Normalization Committee Special Competition but will end in tears when the club lost by two goals to nil to Ivorian minnows San Pedro.The defeat will coincide with head coach Kjetil Zachariassen – replacing C. K. Akonnor prior to the CAF Champions League – and see fan favorite Maxwell Konadu takeover the club ahead of the 2019-2020 campaign.

Yacouba featured regularly for Maxwell Konadu’s charges until he was frozen out of the team allegedly because he had refused to renew his contract with the Porcupine Warriors.

He will later feature, with limited game time until the league was suspended due to the novel coronavirus.Yacouba is currently a free agent with rumours of an imminent move to Medeama on the cards.

Rise up against Akufo-Addo’s dictatorial closure of radio stations, abuse of journalists – Mahama...